Since winning the First Prize in the 1986 Naumburg International Cello Competition, Mr. Diaz has exhilarated both critics and audiences with his intense and charismatic performances. He has earned exceptional reviews for his “strongly personal interpretive vision” (The New York Times) and his “bold and imaginative” playing (The Boston Globe) and was awarded the prestigious Avery Fisher Career Grant as well as a generous grant from the Susan W. Rose Fund for Music in 1998. Andres Diaz’s numerous orchestral appearances have included return engagements with the Atlanta Symphony under the late conductor Robert Shaw; performances with the American Symphony at Carnegie Hall, the symphony orchestras of Milwaukee, Seattle, Rochester under Christopher Seaman, the Boston Pops and Esplanade Orchestras, the Chicago Symphony at the Ravinia Festival with Edo de Waart conducting, and the National Symphony Orchestra. Among the highlights of Mr. Diaz’s recent seasons are tours of Taiwan, Hong Kong, Korea, Japan, Hawaii, and Canada performing in recital and with orchestra; appearances in Chile, Venezuela, Argentina, the Dominican Republic; a series of concerts in the Soviet Union where he performed as soloist with Russia’s Saratov Symphony in the cities of Saratov and Moscow; and a tour of the major cities in New Zealand with the New Zealand Chamber Orchestra.

Andres Diaz’s debut solo recording on MusicMasters of works by Manuel de Falla and Robert Schumann with pianist Samuel Sanders was acclaimed by The Boston Globe as “strong and subtle; everything Diaz does has personality and, better than that, character.” On the Dorian label, the two artists have also released Brahms’s Sonatas for Piano and Cello; Russian Romantics, a compilation of short Russian works; and most recently American Visions, featuring works of Barber, Bernstein and Foote. Mr. Diaz’s most recent release features the six Bach Suite on the Azica Records label, also available at ArkivMusic.

Andres Diaz is very active with the Diaz String Trio, featuring violinist Andres Cardenes and violist Roberto Diaz. At Carnegie Hall in April 2003, the trio performed the world premiere of a string trio written for them by Gunther Schuller. The trio has performed in the cities of Pittsburgh, Washington, Boston, Los Angeles, Miami; at the Kuhmo Festival in Finland and the International Festival of St. Cypriene and the Casals Festival in France; and they have toured extensively in South America, Mexico and Canada. The trio was invited by Isaac Stern to play at Carnegie Hall’s Centennial Celebration, and from 1994-96 it served as Trio in Residence at the Florida International University. They released its first recording featuring the music of Paganini on the Dorian label. A second recording was released in 2003 featuring music by Penderecki, Dohnanyi, Beethoven.

Andres Diaz was born in Santiago, Chile in 1964, and began studying the cello at the age of five. Three years later he moved to Atlanta, Georgia and studied at the Georgia Academy of Music with Martha Gerchefski. Mr. Diaz graduated from the New England Conservatory where he worked with Laurence Lesser and Colin Carr, and currently plays an active role in chamber music performances with the Conservatory’s faculty. He served for five years as Associate Professor of Cello at the Boston University and Co-Director of the Boston University Tanglewood Institute Quartet Program, resigning in September 2001. Mr. Diaz now lives in Dallas, Texas with his wife, Julie, and sons Peter Manuel and Gabriel Andres. Presently, he is Professor of cello at Southern Methodist University. During his spare time Mr. Diaz races his 1997 Dodge Viper. He plays a 1698 Matteo Goffriller Cello and a bow made by his father, Manuel Diaz.

Mr. Diaz holds The Koerner Chair in Cello at The Glenn Gould School of The Royal Conservatory of Music in Toronto. 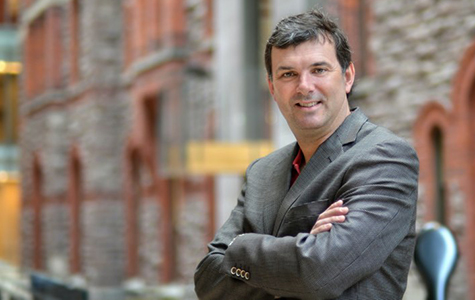