Tadeusz Gadzina, having finished the State Music Secondary School in Wrocław in the class with Stanisław Majewski and Ignacy Grobelny, he started his studies at the State Higher School of Music in Warsaw (currently the Fryderyk Chopin University of Music), taking a class with Professor Zenon Bąkowski. He mastered his abilities at the Guildhall School of Music and Drama in London in the class of Yehudi Menuhin and Yfrah Neaman.

He has been successful both as a soloist as well as a chamber musician. He is the founder and primarius of the Wilanów Quartet known for its achievements almost worldwide. The ensemble is the winner of the 2nd Prize at the International Joseph Haydn Chamber Music Competition in Vienna in 1972, and of the 3rd Prize during the International ARD String Quartet Competition in Munich- organized by the Bavarian Radio.

As a soloist, he made numerous radio, television and disc recordings, recorded an album with the violin works of Karol Szymanowski and Witold Lutosławski among other things, which was awarded Les Diapasons D’or of the Parisian company ACCORD in 1990.

He performs around Europe as well as in Japan, USA, South America (Brasil, Peru, Columbia, Venezuela, the Argentine), Canada, Russia. He is invited to run master courses both in Poland and abroad (USA, Canada, Brasil, Belgium, Spain, Germany).

In the years 2000 – 2002 he co-operated with the Japanese chamber orchestra Tokio Solisten with which he produced a record of Johann Sebastian Bach’s works.

Each year since 2002, he has tutored international master classes in the Morningside Music Bridge as professor in residence, representing Polish violin school b

As part of the European programme of the exchange of experiences in the field of artistic teaching- Erasmus Socrates , he lectured on numerous occasions in prominent centres of music education such as: Brussels, Stuttgart, Bremen and other places.

As a titular professor he conducts a violin master class at the Fryderyk Chopin University of Music in Warsaw where in the years 1999-2005 he held the position of Head of the Department of String Instruments.

Many times he performed a function as an expert for scholarships and financial support for artistic projects granted by the Ministry of Culture and National Heritage (the period of 2004-2008). In the years 1997-2006 he was a member of the Council of Higher Artistic Education.

Currently, he is a reviewer of research projects within the OSF system appointed to this role by the Ministry of Science and Higher Education

In his soloist and chamber music activities he acts under the auspices of the Fryderyk Chopin University of Music and the Old Town Cultural Centre where he finds support and understanding necessary for his artistic achievements. 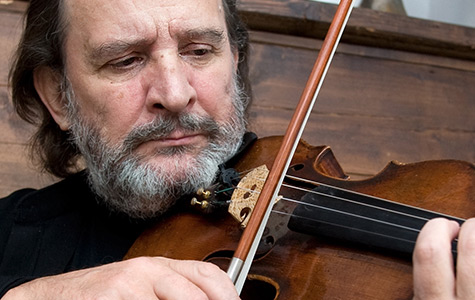